One hour to midnight.
The clock seemed to be turning slowly, time stretched into a different rhythm, were minutes had turned into hours.
How much longer would he have to endure this? - Seth thought.
He didn’t belong here, to this party, to this elegant big house filled with rich kids from the West side of town, all done up in designer clothes and permed hair, all looking as if they had just walked off the set of Dynasty.
And there was him, in his second hand clothes inherited from an older cousin with no sense of style, big Christmas jumper and faded jeans, his grey eyes hidden behind a curtain of straight dark hair.
Perhaps he should have accepted Aidan’s invitation after all, even if he had little in common with his friend’s work colleagues. He had seemed more logical mixing with fellow college students. But now he felt just as ill at ease. Why had he come?
Of course he knew perfectly well why. The reason for his presence was standing a few paces from him, talking with friends and laughing, looking more beautiful than ever, a blue and golden vision of seventeen year old perfection.
What had made him think tonight would be different? Had he really imagined that Tara would finally look his way? The shy, awkward boy from the East side's council estate who had fancied her in silence since Senior School? What kind of New Years Eve’s miracle had he hoped would happen?
He should disappear before people started kissing and singing drunken traditional songs, go home and hide in his room, cry and maybe write another silly story about wasted love. Start the new year as the last.
Seth left the crowded living-room and moved to the hall, where he managed to dig out his coat from under the heap that had been dropped on the old oak settle by the door. There wasn’t really any point in saying goodbye to the others, especially the host. He couldn’t say he liked James Douglas-Smith all that much, the spoilt rich brat. And he was sure the feeling was mutual. So he might as well sneak out the door before anyone realised he had gone.
“Are you leaving?” A familiar voice put a stop to his plan for a quiet exit and he glanced at Livy standing in the living-room doorframe. The way she was staring at him from behind her glasses unsettled him. Did she know he was so desperately and hopelessly in love with her older sister? She always seemed to see right through him.
“Yeah,” he muttered. “I don’t know if I want to be around for Auld Lang Syne. It’s depressing.”
Again Livy scrutinized him, penetrating the invisible wall he put up between himself and the world. There was no hiding and he felt blood rising to his face as if she had just caught him naked.
“Are you going for a walk, then?” She asked.
Seth shrugged. “I’ll probably stop at the bridge and watch the fireworks over the river. Got to be better than here.”
“Sounds like a plan.” Livy smiled, looking suddenly younger than her fifteen years. “I’ll come with you.”
Seth opened his mouth to protest, but Livy had already extricated her coat and scarf from under all others, getting ready to follow him, and he found himself secretly welcoming her company.
“Come on, then.” He sighed, and the two of them slipped outside into the cold night.

“I knew I’d find you here.” Aidan had appeared out of nowhere and now stood beside them, as Seth and Livy leaned on the bridge rail.
Seth smirked. “Of course you did. I told you I probably would come.”
“Hi, Aidan.” Livy greeted him, as if to make sure her presence was acknowledged. She always looked a little intimidated by Aidan. Perhaps it was his boisterous manners, or his slightly dangerous edge, or maybe his good looks that turned even the most confident girls into a giggly, coy mess.
“Hi, kiddo.” Aidan smiled at Livy. “Did you have enough of the posh do as well?”
“Kind of. What about you? I thought you’d be with your girlfriend…”
“Yeah, where’s Alison?” Seth joined in.
Aidan shrugged. “She’s not my girlfriend. We just have fun together.”
“Not having fun tonight?”
“Nah. I thought I’d come here to see if you were around.”
Seth laughed. “Sounds like you had a real crappy night.”
Livy checked her watch. “It’s ten minutes to nineteen-eighty-four. Any wish, resolution for the new year?”
“Mmmmh…” Aidan assumed a pensive expression. “Winning the Pools would be nice. Have a few quid to help my mum and sisters and buy myself a motor.”
“Sounds good. What about you Seth?”
Seth kept his eyes on the waters below. What could he wish for? Sum up the courage to jump in? Or be brave enough to make it through another year of disappointments and heartaches? Grow up and stop being such a prized fool?
Aidan’s hand landed firmly on his shoulder. “How about finally getting laid, this year, mate?”
Seth smiled. “Yeah… something like that.”
“And you, Liv?”
“I wish we can be here again, next year. Every year. For the next thirty New Year’s Eves.”
Seth shuddered. “What? Here, on the bridge? In this miserable town for the next thirty years? Perish the thought.”
“No, no… I don’t mean it like that.” Livy shook her head. “But I’d like it if we could get back together. If our friendship could continue through the years.”
“I see. I suppose that would be nice.”
“Where do you think we will be in thirty years time? On the Eve of 2014?”
“Seth will be a successful best selling sci-fi author.” Again Aidan patted Seth’s back. “He’ll be loaded and take us all to a swanky party.”
“Ha. I’ll be teaching English to Secondary School kids, if I’m lucky.” He placed his hand on Livy’s hair. “Livy here will be the successful one. Famous artist exhibiting all over the world.”
“I hope so.” Livy smiled. “And you, Aidan?”
“I’ll almost certainly be here, still working in a supermarket, still going nowhere, watching you kids making money and the news. I’ll earn a few quid selling stories of your seedy past to Hello! or something.”
They all laughed just as the peace of the night was shattered by loud bangs and the sky lit with colourful fireworks.
“Well, it’s nineteen-eighty-four, folks!” Aidan stood between them wrapping his arms around Seth’s and Livy’s shoulders. “Should we kiss and sing Auld Lang Syne?”
Warmth spread inside Seth, as they huddled together and stood at the edge of life, holding on to their hopes and dreams for the future. Perhaps the new year wouldn’t be so bad, he reflected; he leaned to his right and placed his lips on Aidan’s cheek. “Here’s your kiss, mate. But I’m not going to sing.”
“Too bad.” Aidan chuckled.
To the other side of him, Livy grinned. “Happy New Years, guys.”

You can follow the story of Seth, Livy and Aidan in Playing on Cotton Clouds 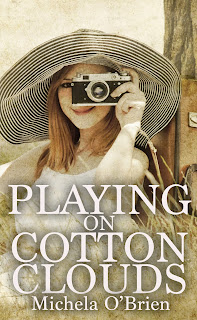 And so it has arrived. The day when you realise it's only one week to Christmas.

Normally I would be panicking. Few more presents to buy, Christmas cards to send, decorations to put up, turkey to order... ARGH!

But, ha! I'm surprisingly organised, this year. A week to go and I'm ready. Shopping finished, cards sent, tree up, I've even wrapped all the presents already.

Pats on the back for moi!

So today I can relax and go on my scheduled Blitz Book Tour for Playing On Cotton Clouds. I will be stopping on various blogs with info about the book and an excerpt for you to sample, if you'd like to join me. Just grab a hot beverage, sit back and put your feet up. There's still plenty of time before Christmas! 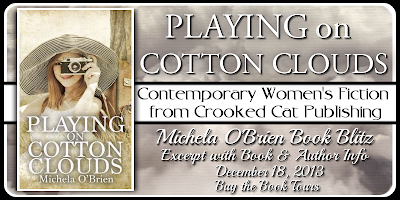 List of participating blogs on the Blitz Book Tour:

Hosted by  Buy The Book Tours


Another year of music is about to end with memories of great concerts and more songs to add to the soundtrack of our lives, some linked to happy times and some to a few tears.

We all have our favourites, I'm sure, and here are fifteen of mine, among the many that filled my player and kept me company while writing in 2013.

15. Secret Colours, BLACKBIRD (ONLY ONE)
Opening track of the American alternative band’s psychedelic album “Peach", it has an amazing instrumental outro.

14. Palma Violets, STEP UP FOR THE COOL CATS
The London based band released their debut album “180” at the start of the year, displaying great energy and echoes of The Clash, The Who and The Libertines.

13. Veronica Falls, MY HEART BEATS
Originally released as a single last year, it was included in the album “Waiting for Something to Happen”, which came out in early 2013, so it makes the list. Fresh and uplifting.

12. Gabrielle Aplin, PANIC CORD
A gentle, lovely ballad about the fear of commitment and a hint of regret for possibly having pulled out of a relationship to soon. Simple, sweet and heartfelt.

11. Avicii, WAKE ME UP
A chart topper, this song dominated the radio waves all summer with its mix of country/folk and dance. Just puts me in a good mood every time.

9. Johnny Marr, NEW TOWN VELOCITY
2013 has been a successful year for Johnny Marr, whom I had the fortune to catch live twice in June. This is my favourite song from his album “The Messanger”.

8. The Arctic Monkeys, No 1 PARTY ANTHEM
The new Arctic Monkeys' album, “AM” wasn’t quite as good as 2011’s “Suck It and See”, in my opinion, but it includes some excellent songs, of which this one is the pinnacle.


7. I Am Kloot, THESE DAYS ARE MINE
Difficult to choose just one song from I Am Kloot's beautiful album “Let It All In”, but this is definitely one of the highlights.

6. Jake Bugg, ME AND YOU
Jake was the sensation of 2012, with his self titled debut album. His follow up, “Shangri La”, is more of a mixed bag, but he still delivers aplenty when playing to his strength, the acoustic ballad.

5. Primal Scream, IT’S ALRIGHT, IT’S OKAY
Despite the departure of bass player Mani, who in 2011 rejoined the reformed Stone Roses, the Scream were back in great form last May, with their new album “More Light”, possibly their best work since XTRMNTR. Plenty of great tracks. This is the poppiest moment, which lifted me up all summer, a great sing along remindful of “Movin’ on Up”.

4. Jagwar Ma, THE MAN I NEED
From the psychedelic/dance Australian duo’s album “Howlin’”, this can only be described as sunshine in a record.

3. Masters in France, FLEXIN
Nothing French about this Welsh band, whose track “Playin’ with My Friends” has been made famous by the quirky IKEA advert. “Playing with My Friends” was released towards the end of 2012, so, though I’m still obsessed with it, it can’t make this list, but “Flexin” came out earlier this year and it’s just as good. Apparently they have been recording their debut album, which, if this is anything to go by, promises to be rather good.

2. The Temples, KEEP IN THE DARK
I’m really looking forward to the debut album from this new British band – scheduled for February 2014 – whose music is drenched in 60s psychedelia with a nod to glam rock (bit of T-Rex going on here). Currently touring with Primal Scream.

1. Arthur Beatrice, CARTER
Palm of Song of the Year 2013 from me goes to this stunning track by British band Arthur Beatrice. Album also scheduled for February 2014 and I’m very much looking forward to it.