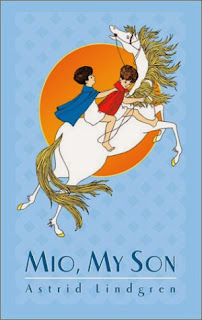 Mio, My Son (or Mio’s Kingdom depending on translations and issues) is a special book.

Written by Astrid Lindgren, better known for Pippi Longstockings and Karlsson on the Roof, it was first published in Sweden in 1954 as Mio min Mio; a high fantasy book, contemporary to The Chronicles of Narnia and The Lord of The Rings.

Most importantly, though, it was a present for me from my father and it was the first book I read on my own, aged eight.

My copy had a different title still – Mio Piccolo Mio – as I read it in my native language, Italian, and that very same worn out copy can still be found on my bookshelf.

The story tells the adventures of Karl Anders Nillsson, an orphan who lives with his foster parents, Aunt Hulda and Uncle Olaf. Hulda and Olaf care little about Karl, find him noisy, messy and annoying, and Karl envies his friend Ben, whose dad builds plane models with him and draws marks on the kitchen door to see how much Ben has grown.

One day, Karl happens to find a genie and is suddenly whisked away to a new world, Farawayland. Here he discovers that his real name is Mio and he’s not an orphan, but the son of the King. Karl – or Mio -  now has a real father, new friends and everything his heart desires, but his newly found happiness is under threat.
The Kingdom lies in the shadow of the mysterious and evil Sir Kato, and Mio is the only one that can defeat him. With his companion Pompoo and his beautiful white horse Miramis, Mio leaves on a dangerous quest to destroy Kato…

Mio’s adventures had me hooked from page one and the many characters, friends and foes he encounters in his adventures filled and excited my imagination. I still remember the sense of trepidation I felt at bedtime, sitting under the covers, as I turned the pages – with their charming black and white illustrations – dreading the moment when my mum would appear to announce it was lights out.


Reading on my own was a new experience. Up to that point, books had been a shared occasion; characters spoke with my mother’s voice, stories were enriched with her observations and helped along with her answers to my questions. Now there was no one but me and the world into which I had just stepped. I could give a voice to each character, find my own answers through descriptions, dialogue, narrative, immerse myself in the story completely, escape to Farawayland and feel the joy, sadness and fear (Sir Kato terrified me!) that Mio felt. It was a new and exciting way of living a book.

Quite a few more years and books later, I have discovered many other worlds and seen life from new perspectives; I have been moved and amused, entertained and provoked.

The magic of books had been opened for me.


It was Mio and his friends who unlocked it and for that they will always be special.

Where did it all start for you?

Mio, My Son is published in the UK by OUP Oxford